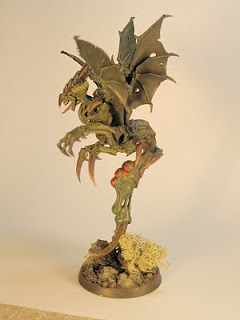 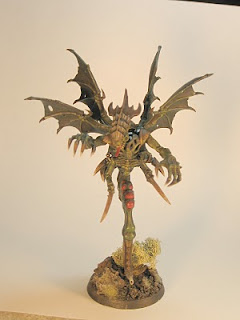 Another great Tyranid codex challenge.  An original tyranid warrior, a plastic hormagant, 2 new gargoyles, an old carnifex, and a trygon were mercilessly hacked to pieces for this parasite.  I like how he turned out.  I originaly had a old raverner head on, one with a big, open mouth full of teeth, but I like the Tyranid warrior head better.  I shaved the head crest down a bit to give it a little bit different look.  I added a brass tube to the end of the trygon tail to add the Hypodermic needle look to the tail. 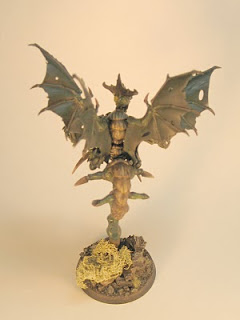 The wings turned out well.  I painted them with ork hide foundation paint, washed with baal red wash, and then drybrushed the arms with camo green.  Then I added some subtle stripes/veins with the dark green and red washes.  They are very faint, but are easier to see on the actual figure. 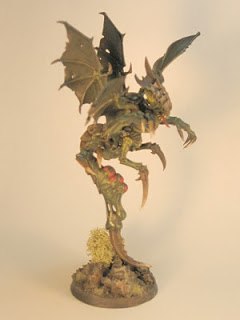 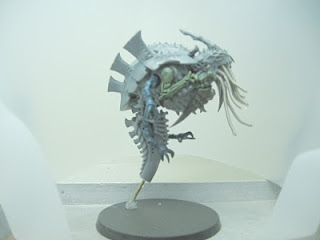 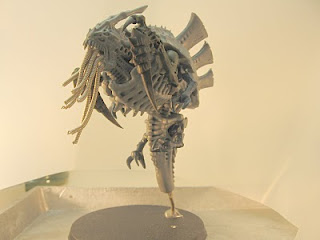 I needed another Tervigon, and decided that I wanted to try a different approach to him.  I have liked some of the upright Tervigons I have seen online.  This one takes a lot of ideas from terrorfex on warpshadow.com.  (link here spawnthis)  You can see it is based on the carnifex model with old genestealer arms.  I am going to magnetize the front arms again so I can switch out claws and talons.  I liked the head, until I saw online where someone had called it a bunny.  So all I see now is a bunny head on the monster.  I'll have to do something about that

I like the small, impotent looking arms.  They tend to draw your attention to the tail and head, and he doesn't look like a monster in close combat. 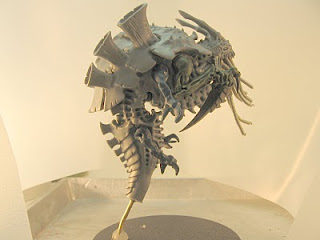 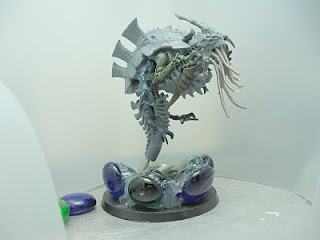 I wanted it to have a grotesque egg-sack kinda like the brood mother on the aliens movie.  I think the second one.  So I brought in the beads.  I plan on covering them with greenstuff to make a sweet, bloated tail attached to the beast.  I am trying to decide to have one exit point for the termies out the end of the tail, or a couple spots along the tail with multiple tubes/exits.  The feeder tentacles are bass guitar strings that will be supplemented with green stuff.  Gotta cover the teeth and make 'em look more like tentacles.  I put him on a carnifex size base.  I need to take a pic of him next to a venomthrope, and my other tervigon for a nice family pic. 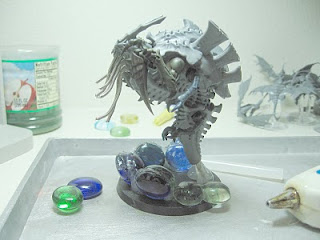 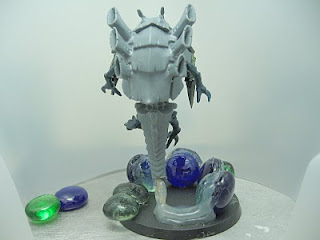