Like everyone else in the 40k universe, I have been reading all the rumors I can find, about the new rules.  From what I have seen it is going to change a lot.  I like change.  I like having to figure out how to use my armies/playstyles under the new set of rules.

I think know that the dark kin are going to miss out on the psychic phase.  I feel like the armies that have no psychic powers are gaining some abilities in other areas.  For Dark Eldar, it looks like the jink and flyer rules are our new redeeming abilities.  But if jink gives you a 5+ save, why would anyone ever get a flickerfield?  Also I am hoping that flyers are always hit at BS 1, even when only flying 12".   Also, kill points look to be out, so victory points work better for us, with a lot of cheap transports.  BRING ON THE VOIDRAVEN!

I don't know what you all think, but Eldar have always been the kings of psychic powers, according to the fluff.  In this new edition, they only get 2/5 of the powers, while most imperial factions get 4/5?  How does that work?  Other than that, we just really need a new Codex.

The monstrous creatures seem to be getting a much needed boost.  I would love to see a couple tyrannofexes next to a tyrant, giving them preferred enemy that re-rolls to hit rolls.  And it would be great to see a trygon open up a landraider by doubling its strength for a couple less attacks.

The Wolves should be fine, because they are an imperial army.  If all the Close combat weapon rumors pan out, and power weapons are ap3, then I really want to make a drop pod terminator army.  I have always had a love hate relationship with them.  At first I hated terminators, when playing against them.  And love to use an army of them, or use them in Space Hulk.  I think they should get  a boost in 40k.  They are supposed to be super tough, and can die pretty easily to a lot of stuff right now.

So what do you think?  Anything I missed for any of the armies?  I am sure there is a lot I have missed for these armies.  Let me know what you think.
Posted by Unknown at 1:49 PM 1 comment:

So we have a new campaign.  The last one with Hqs gaining experience points and abilities, kinda fizzled out.  It was a nightmare trying to document, verify and distribute all the attributes all 14 or so of the characters had gained or lost.  It also didn't seem to make any difference, in the grand scheme of things, whether you won or lost.  So we switched to a map campaign.  Here is our map after 3 turns.  I am the Kabal of the Flayed skull icon (Large skull) in the upper right.  The central 4 planets are worth 2x monthly income as the other planets. 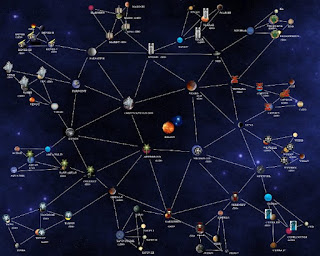 We have a rule that every army 500 points or under DOES NOT have to follow the Force organization chart.  So the battles can get pretty crazy.  Every turn you can attack any planet adjacent to a planet you own, or you can scout to any planet in the system that is unoccupied.  The scout games are pickup 500 point games.  You win, you take the planet, lose and no planet for you.  Each planet generates 100 points per turn, central 4 produce 200 points/turn.  It is also Imperium vs Xenos.  Starting with my planet and going clockwise we have:Salamanders, Chaos marines, Black Templar, Dark Eldar, Grey Knights, Chaos, Raven Guard, Necron, Space Wolves, Eldar, and more Grey knights.

My next battle, I am going to challenge the space wolf player at coruscant from Endor.  I will only have 400 points and he will have 500.  Should be fun.
Posted by Unknown at 1:32 PM 1 comment: