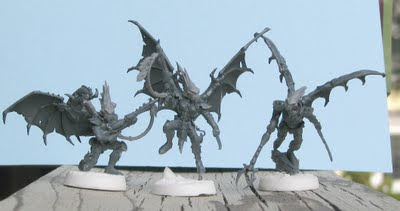 I finished assembling my scourges.  Well, I guess they still need a few things.  The guy on the left has some adrenaline injectors on his shoulders.  All of the scourges will get them.  They are eldar guardian shuriken catapult cartidges from their belts. 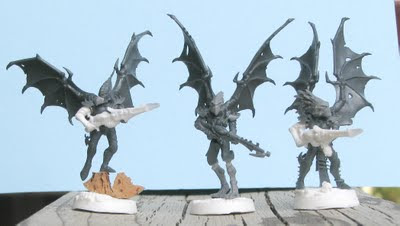 You can see the dar eldar on the left isn't as modified as the others in the squad.  I wanted to try to show that maybe some of the dark eldar can't afford all the modifications that others can.  So he's a wannabe with a beak glued to his helmet. 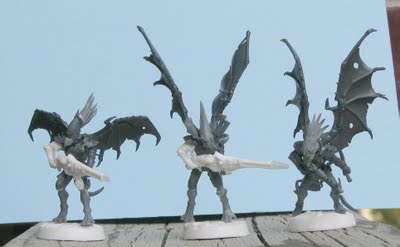 My favorite model is the one on the right.  I like the longer beak and devious stance he has.  Looks like he is ready to stab someone in the back.  All the white guns are magnetized heat lances.  I have found them to be very effective if you are within 9 inches of your target.  Also great for cooking power armored chumps. 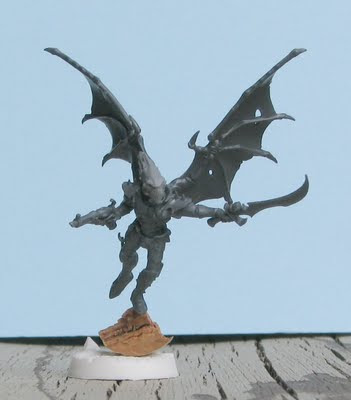 This one has magnetized arms.  I doubt I will ever get the solarite upgrade, and probably never give him these weapons.  But its fun to try them out.

The Incubi are about 75% done.  I gave the Klaivex the archon's head to set him apart.   Just some finishing work to do.  I love these models. 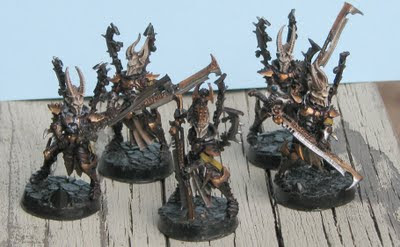 Here is the second squad.  Same idea for the Klaivex.

This is my newest project.  We have a mega apocalypse battle with the gaming group in Flagstaff, and they wanted 3k of painted models.  Everything had to be painted.  So for the last couple weeks, I have been putting them in squads, giving them all official space wolf shoulder pads, and resin bases.  Once they were all assembled, I used the airbrush to base coat, shade, and highlight.  You can see I already had 2 squads painted, but am painting the rest of the army as a whole, instead of 1 squad at a time.  We'll see if I hold out.
The list includes: 2 rune priests, Logan, a Wolf guard battle leader and a Wolf Priest.  The Wolf Guard battle leader and wolf priest go with the 13 blood claws in the LR crusader. Logan and Arjac are accompanying a long fang, douchebag squad in the drop pod.  I then have 2 long fang squads with 5 rocket launchers each, and one squad is accompanied by a wolf guard with cyclone missile launcher.  I then have four squads of 8 grey hunters, 3 meltas and 1 plasma squad.  Each squad has combimelta power fist, or combiplasma power fist wolf guard leading them.  I left the thunder wolves, dreadnoughts, and other terminators home this battle. 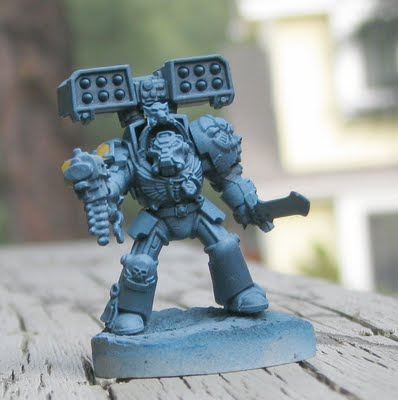 Here are some examples of my airbrushing.  I started with black, dark blue, medium blue, and then finished with space wolves grey.  With each color, I painted less and less of the model, and with Space wolves grey, only painted from directly above the model.  It took about 2 hours to paint about 55 space marines.  Now for the finishing details. 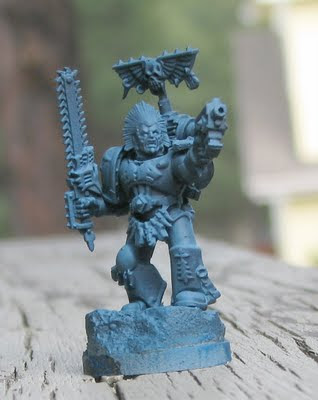 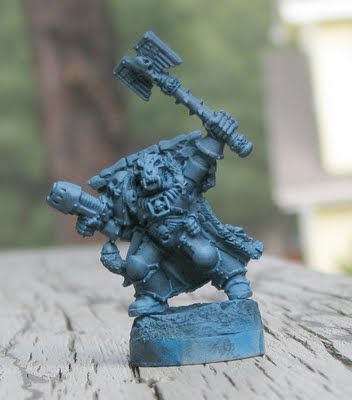 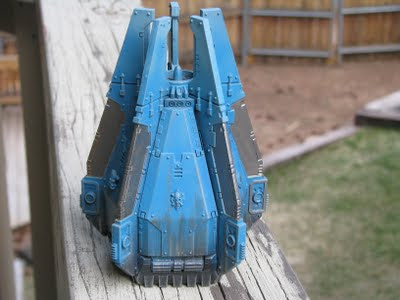 I made some progress on the drop pod too.  I like how the weathering came out.  I used watered down paint, a medium sized paint brush, and quick vertical strokes, from the bottom up, to get the burned look. Where the bolt gun metal paint is on the fins, I tried yellow, brown, and finaly decided on the silver.  I like the more subdued look. 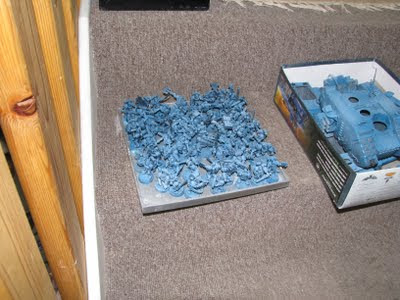 Here are the freshly painted wolves in their carrying tray.
Posted by Unknown at 9:16 PM 1 comment: