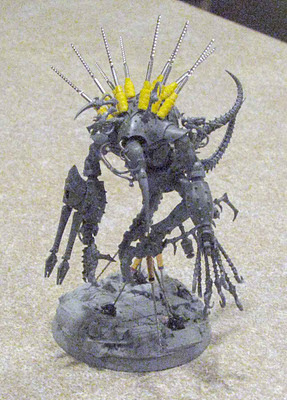 Here is my magnetized, assembled Talos.  The lighting isn't the best. I magnetized both arms with large magnets at the shoulders, and smaller magnets in the elbow.  The tail is magnetized, and so is the gun on the forearm.  I made the custom chain flails with the hook close combat weapon, 2 chains from a venom, and two chains from the raider sprue.  I think the hook weapon looks good with all the chains and hooks.  The gun mount came to me after I tried to mount it on the top of the carapace, on a tail tentacle, and a couple of other failure locations.  The arm looks pretty cool.  Just need to green stuff the hole on the top of the guns. 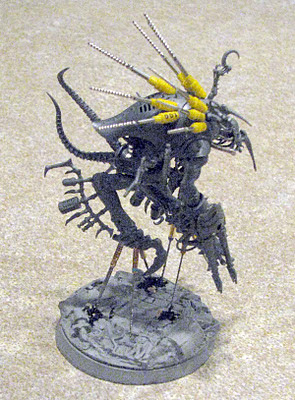 You can see I mounted the talos top bony, injector thing on the underside of his legs.  Looks a lot like a spur on a fighting rooster.  May name him Foghorn Leghorn. 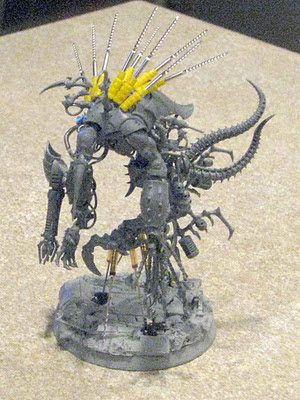 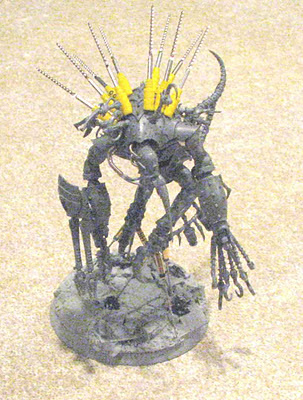 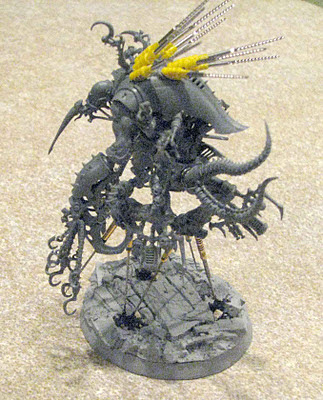 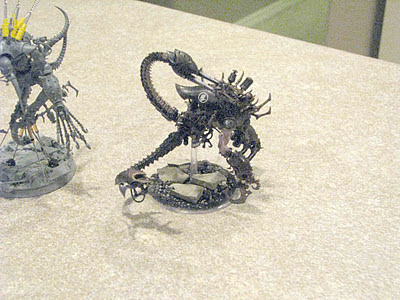 Here are some changes I made to Brutus.  I gave him an extra tentacle arm, mounted the gun up high, and magnetized his arms a bit more. 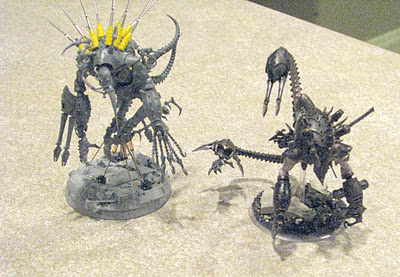 I added a wrack close combat weapon on his left too.  Now to try a web way portal list.  2 Talos, reavers, scourges, big wyche squads, wracks, and probably some beasts. 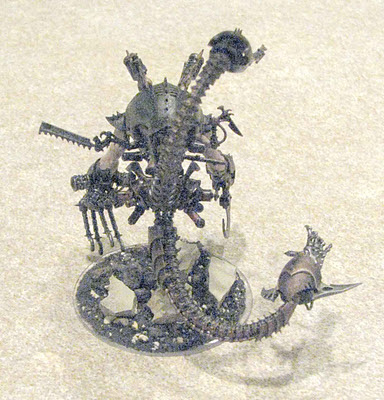 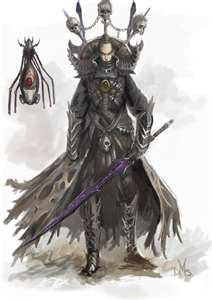 Our local group had a great tournament on Saturday.  I wasn't able to play the whole day, but came down as a fill in for one of the rounds my list was:

One thing I like to do to make life simple, give EVERYONE flickerfields.  No need to try to remember who has 'em and who doesn't.

The Tournament was set up well and was a lot of fun.  This was the list I made when I thought I could possibly make it.  Two out of three missions were objective bases, so I brought a lot of troops.  I ended up ruining a Tyranid player's day.  He had a good list, and was a good player, but I ended up winning 3 objectives held by me, and one contested.

A few things I have learned about my list and Dark Eldar in general.  I have found that, in true Dark Eldar style,  you can play some mind games with the dark kin.

1.  WYCHES ROCK.   Fleet, combat drugs, 4+ invulnerable in CC, Feel no Pain (with the Haemy attached), plasma grenades, haywires and hekatrix,  these ladies are great.  They can take out armor with their grenades, and are great against everybody in CC.  I have found the only wyche weapon I really like is the shardnet and impaler.  I usually don't take them though, because I would rather have another wyche than the special weapon, and I like to shoot their splinter pistols on the way in, if needed.  I find I get more out of the pistol and an extra wyche, than the special weapons. The 4+ dodge save is Demoralizing for the opponent.  It says, "I don't care you have lightning claws, bone swords, etc., sorry you only killed 1 wyche."  Very Demoralizing.  The haywire grenades ruin a tank commander's day too.  Love the ladies.

2.  Asbrudel Vect is pure mean with a side order of mean.  Also very demoralizing.  He has a very reliable way to get wounds back, his base stats are amazing, and wargear keeps him alive.  In this battle he took out a tervigon-prime combo, 5 genestealers and a hive guard.  He is a beast.

3.  Venom Raider combo.  I really like having Venoms full of less effective troops, and raiders with the more effective troops.  Usually opponents will focus on taking out the venoms because they put out so many shots.  Then your raiders are safe to do what you want with the real threat once the ravagers, venoms, and raiders have softened everyone up.  Then you can swoop in on turn 2-4 and take the objectives leaving the opponent with no one left to stop you.

4.  TROOPS, TROOPS, TROOPS.  Whenever I build a list, I try to fit in some Incubi, scourges, reavers, trueborn, etc, but always ask, "why take them, when I can take some awesome troops with the abilities to kill stuff AND claim objectives."  Its great to do a lot of flying around shooting stuff for turn 1 and 2, and then jump on the objectives with your intact skimmers full of troops.  Many times I have picked up a warrior, wrack or Wyche squad with a venom or raider, and turbo boosted over to an objective. ( I know you can't move flat out the turn you pick someone up, but 12" is still a pretty far move AFTER the troops move in to embark)

5.  Hexrifles are fun and demoralizing.  I know that they aren't reliable, but they are scary for your opponent.
They are also great that the Acothyst can carry it WITH his standard 2, 4+ poison weapons.  He doesn't have to replace anything, just carries it on a holster when not in use.  Its nice to be able to reach out and hurt someone from 36" inches away if your venom ride has gone down, or only moves 6".
Saturday I was very lucky, and my acothyst hit, rolled a rending 6 to wound, and his Trygon Prime was nice enough to roll a 6 for his wound test, turning into an awesome, crystal, Trygon statue.  My whole Dark Eldar army got a picture with it after the battle.  They are trying to tow it back to commoragh in one piece.  The Acothyst, of course, got the crystal head to stand on during battle.  Great shot Bro!

6. Skimmers rock.  Its also pretty intimidating to see 9 skimmers sitting across from you.  Many people came up to us as the game was starting and commented on all the skimmers.  Psychology does start to play a role, and people get into react mode, and forget their gameplan, leaving them open to your nefarious plans.

Dark Eldar are a lot of fun.  I love the new models, the new rules, and how they released everything so quickly.  GW did a great job on this army.  Now, LETS SEE THE VOIDRAVEN!
Posted by Unknown at 8:23 AM 6 comments: 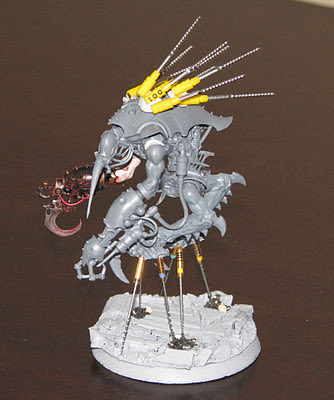 Here is my latest creation.  I felt like if any 40k model would be unique, it would be the talos.  I liked the floating original, but wanted a Talos with legs.  I thought that the Haemonculi designers would like the talos on stilts.  I could see them laughing when the monstrosity fell over, and struggled to get back up on its pointy feet.  He looks kinda like an attack chicken.  I will definitely magnetize the tail and arms. 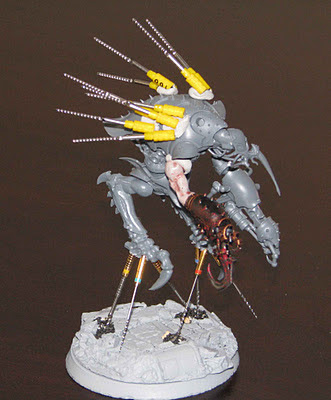 You can see he has borrowed some painted parts from his finished brother. 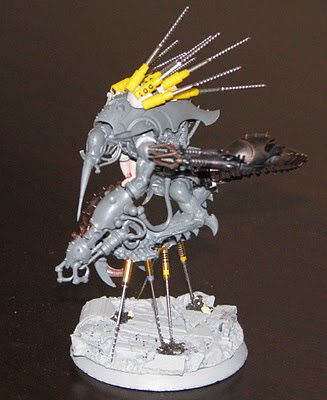 And he is half held together with plasti-tac.  Great stuff. 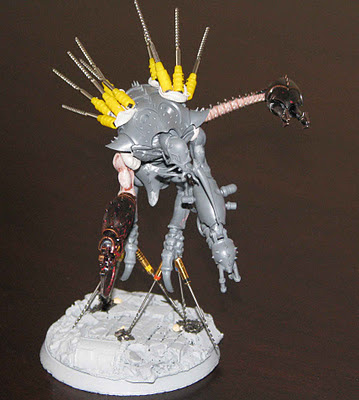 I may move the tail gun up to a shoulder mount on a smaller tentacle, and add the chronos tentacles out the back.  I like that look a little better than having the large talos tail with the gun on it. 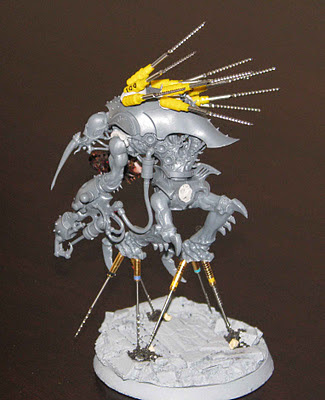 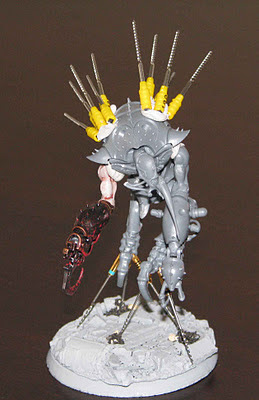 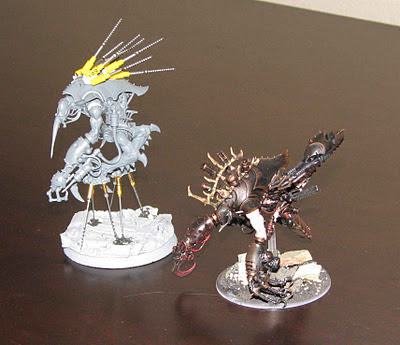 And next to the original.  He is a bit taller which is bad for gaming, but I like the look of him.  I have switched around the magnetization and build of the original a little. He's almost done painting.
Posted by Unknown at 11:34 AM 1 comment: