Campaign Points
Battle points are 3 for a win, 1 for painted army are separate from the xp an hq can get.  These points are used every round to see which side won.  So if jed wins 5 battles, mike wins 4, jeremiah wins 1 and Daniel wins 3, and all armies are painted, then you would have (5x3)+(4x3)+(1x3)+(3x3)=39 win points,  5+4+1+3=13 paint points or 52 for the imperium.  Say the axis had 57 points, then axis would win that round and the campaign would start to swing in their favor.
You can send out the battle results to the whole group for bragging rights or just send them to me and I will post the results.  The results will determine what happens in the next game.  Remember, these results are only for your chosen opponent for that round.  You can play other games against other opponents for campaign results but not for xp.  So if you play and lose against your assigned opponent, then win against two other people, and your army is painted all three games you would get:
3 + 3 points (2 wins)   3 points (all three games painted army) for your side.

Also, subsequent games DO NOT have to be the prescribed game.  You could play a battle missions game, or a random game out of the rulebook, or anything else you and your opponent agree upon.  Just trying to keep it fun.  Let me know if you would like any changes or revisions to the setup to keep it fun.

So the two sides will be forces of the Imperium:


For the first battles, lets do a basic anhiliation mission from the 5th edition book with random deployment.  500 points per side.  Army builder lists are best, but you can agree with your opponent beforehand, if you don't have access to the program.  Play on a 4'x4' table, with enough terrain to cover at least 1/4 of the table.  Randomly placed on the table in a manner agreeable to both players.

For the generals,  I am going to assign opponents each round.  You can (and are encouraged) to play others during that round.  Your general can only gain experience against your assigned opponent, one battle per round.  You need to tell your opponent that you are playing for experience this battle, and results will be tallied/recorded.  Both players should play for experience the same battle.  Breaking squads in assault, killing monstrous creatures, tanks, enemy HQs etc. will give you experience.  If your general dies or does amazing feats of awesomeness, you will roll on a chart and gain or lose experience accordingly.

You can use different generals each battle, or the same one the whole campaign.  Just let your opponent know who the battle leader is.  "This here is Captain John, he has this statline, this experience etc.  I really love this guy, please don't kill him."  Something like that.

Here are some rules to keep things sane.

After each battle, I would like to have the winning player write up a small report with the following stats:


Also any pertinent information about each hq if it is an experience gaining game. This way the exploits of each general and army will have a history in the game.

You can play any other play at any time.  If you played against a team mate, that would just be a practice game and wouldn't add to the tally of which side is winning or losing. 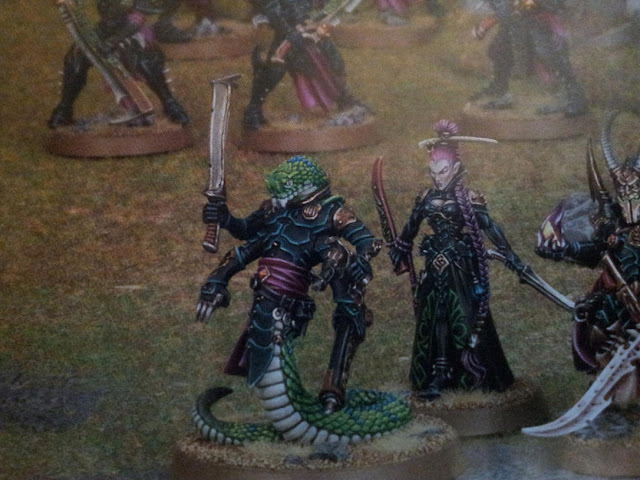 Now we are talking.  Here are the new pics of the Sslyth and Lhamean.  I like how the slyth is holding the weapon with two left arms instead of across his body.  His head looks a little static.  I would like to see him with his mouth open.  Great upper body for conversions and stuff.  The lhamean looks pretty good.  I could see a Lady Malys conversion easily made from her.  Now I am ready to get a court.  Sweet models.  Originaly here wolves for the wolf god
Posted by Unknown at 2:41 PM No comments:

Our local group is doing an escalation league and we started at 500 points.  I am running dark eldar of course to get my army all done.  My list was:

8 Wyches with haywire grenades, hekatrix with venom blade
in raider with flickerfields and dark lance


My opponent had 2 ten man squads of salamanders with a flamer and multi-melta each, and a captain with ccw and bolt pistol.

We played annihilation with pitched battle.  Now I SHOULD have flown around, blasting the mon-keigh until they were whittled down enough, then swoop in for the kill.  Would have been easy, but rather un-sporting.

So I charged in, had him on his last leg looking for the win about turn 3, when he used a strategic know no fear withdrawal that moved 4 guys out of charge range of the talos, who then promptly gunned him down.  Then my wyches  got ran down by the captain after 2 turns of winning close combat and finally losing a turn, failing a moral check, and getting run down.   Then my warriors swooped in, shot up some stuff, got shot in return, failed a moral check, and ran like little girls.  So he won with 3 marines and a captain left.

500 point lists are fun and different to play.  With this list I really needed someone with some close combat punch.  I probably should have gone with an archon supporting the wyche squad, or used a ravager instead of the talos.  The talos was great in CC, which is always fun.  Next time I need to be more of a sneaky git.
Posted by Unknown at 10:53 AM No comments: