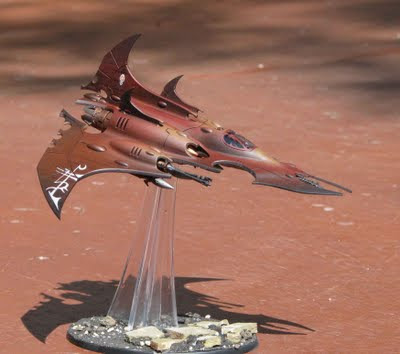 Here is a project I have been working on for the last week, the Dark Eldar Razorwing jetfighter.  I air brushed the razorwing with red over black, then yellow in select spots.  Then I put the streaks on with my micro tip markers.  Then I smeared them with a damp brush, put on the decals, and painted the white marks on.  Great model.  I love this model.  I want another razorwing.  And I can't wait for the Void Raven Bomber. 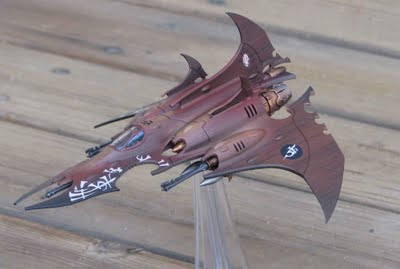 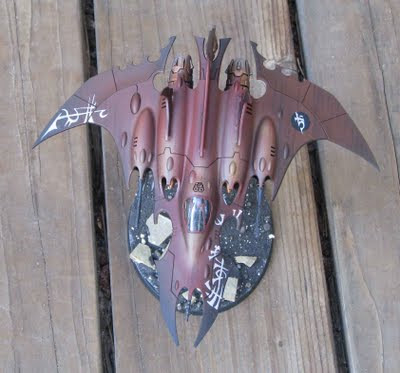 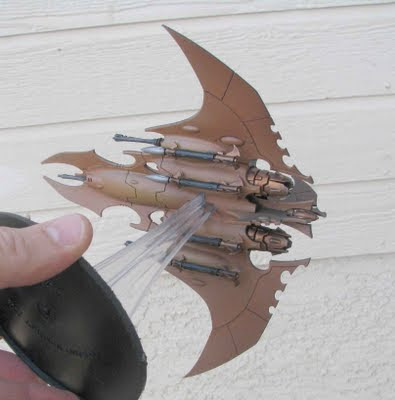 Last message had the results. I have the rules for the next game for everyone.

The planet of Jericho and its moon station are being overrun by Tyranid and Dark Eldar attack. The Tyranids have been nigh unstoppable with stories of a Winged Monstrosity that can eat dreadnoughts, tanks, and even our Space Marines whole. For some reason, the Dark Eldar and a well equipped, rogue faction of Guard have hit our planet and orbiting moon at the same time. The faith in the emperor of our garrisons, has been sorely tested. As we regroup, our focus must be on the moon of Joshua 3.

The moon Joshua 3 has an important research station that has been hit, and is almost destroyed. Our Inquisitors have unearthed an ancient relic on the moon, and the Adeptus Mechanicus have incorporated the relic in the body of a genetor to hide the relic from our foes. Hopefully our ruse has not been found out.

The Genetor MUST be retrieved from the moon, and transported to Jericho. If you fail this mission, the Inquisition will look into your obvious lack of faith in the emperor and lack of martial ability.

Our initial attacks have gone well. Many slaves have been extracted, and we have already started to revel in their screams and pleadings. The Hive Mind has been gorging on the biomass they have acquired, and are generating new monstrosities with all the material they have eaten.

Our work of destruction is almost done on dark moon orbiting the planet. A strange source of Hatred and Pain is emanating from a crude, human construct on the planet. Our Haemonculi want to dissect the human's toy to find and amplify the source.

The scenario is the Evacuation scenario from the Big Red Rulebook. We will NOT be using the KP part of the scenario. The Genetor is the point of the whole game. He can be killed, but that does not win the game for the attacker. Whoever is in control of the genetor's body at the end of the game is the winner. If he is killed, then the squad carrying him become 'slow and purposeful', and 2 people in the squad cannot shoot, but can fight in CC.

The Genetor has a relic incorporated into his body and is an upgrade to a weapon your HQ has. The winning player rolls on the following chart:

So at the end of the battle the weapon is constructed. Roll the result and then the weapon becomes available to your general for next month's battles. The attribute can be added to any weapon you have available in your codex armory. So as a dark Eldar, if I rolled a 4, I could make a sweet venom blade that is a power weapon. Or a +1 attack agonizer if I rolled a 2. The cost of the weapon is the standard cost of weapon. This weapon needs a suitably cool name, and will be tracked from battle to battle.
Posted by Unknown at 10:24 AM 1 comment: