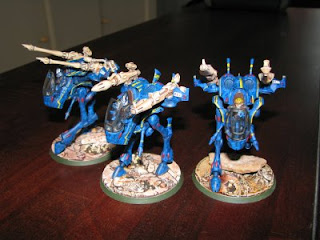 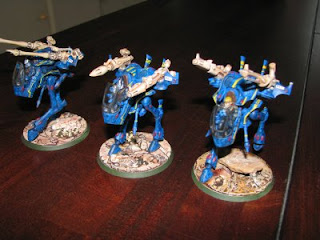 I love the new warwalker squadrons! These guys are ALWAYS in my army. I have another 6 for a grand total of 9, or 3 squads of three. I would never arm these guys this way, but these weapons are the ones that are painted. The guns are all magnetized which make it easy to switch and keep my opponents on their toes. I was playing Mass Effect when I started painting these guys, and that is where I got the inspiration for the racing stripes. I also did the salt-spray paint method for the stippling, but found that the two blues I used were too close together and didn't have enough contrast, and so I had to do some stippling to finish the effect. I love the eldar scenic bases, and added some shells and rocks to each to make each unique. On the walker on the left, I washed over the base with an oil wood stain. I like the look, and will do it again on future models.
I almost always put these guys out on the first turn. Nine warwalkers gets people's attention.
Posted by Unknown at 4:29 PM 2 comments: 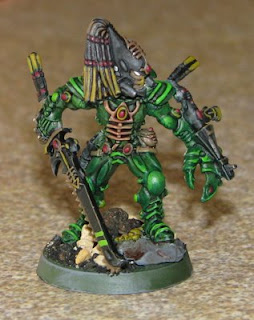 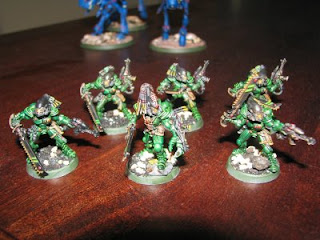 Here are the finished scorpions. I really need to work on my camera taking skills, they are still not quite there yet. These guys turned out great. I found that adding yellow to the green and browns, made a much better highlight color.

I love using these guys on a flank move. They have some great strength 4 (great for eldar) and a great 3+ save which means they won't fold like wet toilet paper under pressure. My favorite memory of these guys in battle was once when they took on a squad of ork bikers, and it came down to the exarch vs the nob with a powerfist. After the last die had stopped rolling, both were dead with the other's powerclaw around what was left of their neck.
(Click on the pic for a better shot of these guys.)
Posted by Unknown at 4:16 PM 3 comments: 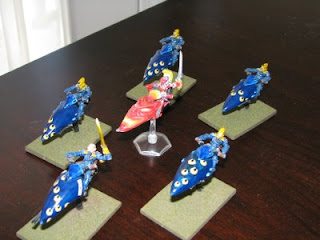 These jetbikes are great in the new rules. With a higher toughnes and armor save they can last a little longer than most eldar troops. The mobility of the jetbikes make them great at keeping the enemy on their toes not knowing where you are going to go next.
Posted by Unknown at 3:00 PM No comments: 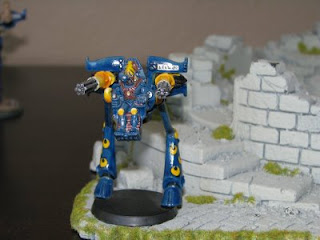 This is one of nine war walkers in my army. The only one that is completely painted, and doesn't have magnetized weapons. I love warwalkers. They work great for thinning out all enemy troops. I like scatter lasers for most armies. Give the enemy enough chances, and they will fail their armor saves. Put your farseer next to them, and with doom and guide, you can cut a serious swath through the enemy. Put nine warwalkers down, and most armies will start to sweat. I usually only use them with the scout move if I am worried that the other army will shoot them down before they get a chance to shoot, or if I have an autarch or two to make sure they show up soon. Sure they don't have that great of armor, but they sure can dish out the pain.
Posted by Unknown at 2:03 PM No comments: 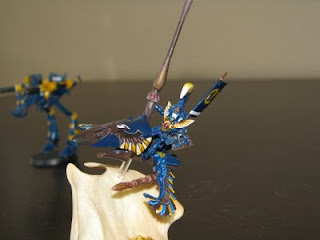 This guy almost won me a painting competition over at Fritz's Saim-hann blogsite. I love the new autarch rules. I built this guy before the new autarch model was available. The reaper launcher is magnetized under the wing, and can be replaced with a fusion gun, or just removed. The body is from Baharroth, and so are the wings. I just cut the wings apart and glued them directly on top of the jetbike wings. I used a dremel to remove Baharoth's arms, head and legs. I liked the hawk motif on his chestplate and painted it onto the jetbike canopy. The scenic base is actually a part of a dog chew toy which looked rather eldarish. He has another back banner which needs to be fixed.
I love this guys 6 strength six power weapon attacks on the charge. I usually put him with my shining spears to get the added bonus of hit and run. I usually don't add the reaper launcher, but want to give it a try soon.
Posted by Unknown at 1:57 PM 3 comments: 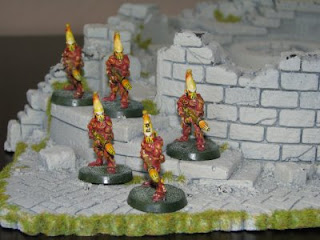 Falcons loaded with these guys are great. I know most eldar generals like to use the tactic
of dropping these guys out of a falcon to toast someone who is bothering you. I love the smell of burnt Carnifex in the morning. I want to try a couple squads of these guys to take down a titan in apocalypse. I usually use the fire dragons with no exarch and 5-6 troops. Larger squads, or squads with exarchs usually don't make it to the enemy.
Posted by Unknown at 1:52 PM No comments: 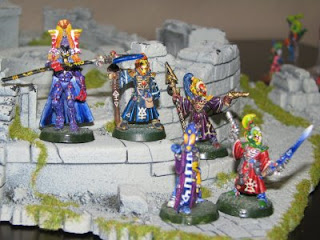 This is ye 'ol HQ. These guys are also from the early 90's. I really like the new avatar, but this avatar saw a lot of action in the past. I liked how you used to roll up the avatar's attributes each time you used him. It made for some exciting avatars!
The farseer pictured is always a thorn in the side of my enemy. I love using him with my warwalkers to doom and guide enemy squads into extinction.
Posted by Unknown at 1:49 PM No comments: 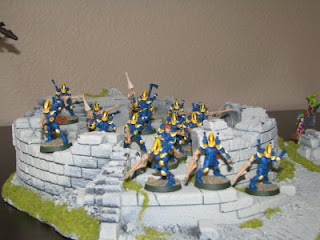 I like the guardians, but according to eldar fluff, I have a hard time using them. If the race is on the path to extinction, I wouldn't send partly trained, weak armored civilians into battle. They are good for sticking to your objective in the backfield, but usually get hosed down pretty quickly when on the front line. I usually use large squads of them, and hope the other player has better targets to shoot at.
One time they did end up driving off and running down a squad of genestealers, much to the surprise of the hive mind controller! (granted the genestealers all attacked some harlequins who were in the melee, but the guardians did win the battle and ran them down.)
Posted by Unknown at 1:42 PM No comments: 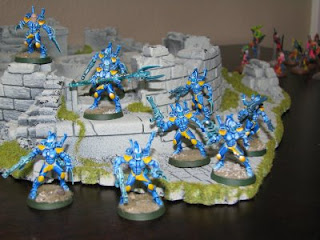 The eldar storm guardians are some of the most underated troops in the eldar codex. I love dropping these guys off out of a waveserpent, toasting whoever is on an objective with their flamers and a warlock with destructor, and then taking the objective after the barbecue is done. Most of the time people won't worry about 10 storm guardians in a waveserpent, until it is too late. These guys are also great counter-attack troops when supported by an aspect or harlequins.
Posted by Unknown at 1:36 PM 1 comment: 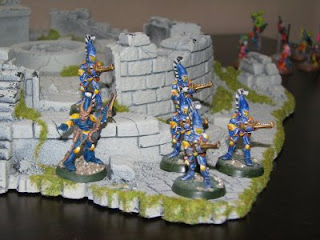 I am happy the Dire Avengers got rejuvenated in the latest codex. I love 10 man squads of these guys either foot slogging across the battlefield, or jumping out of a wave serpent to bladestorm the life out of an enemy squad. I almost always take the exarch with bladestorm and two shuriken catapults. If these guys are stuck in close combat, then I am doing something wrong. I would rather ensure they hit a squad hard, destroy it, and get back in the waveserpent to do it again.
This squad are some of the originals from 1990 or so. I added an old guardian/pirate leader from the original RT eldar. I love his helmet, and think he makes a great exarch.
Posted by Unknown at 1:31 PM No comments: 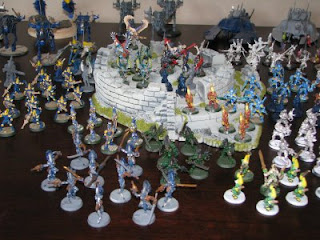 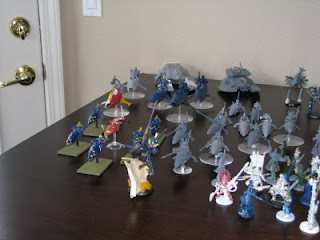 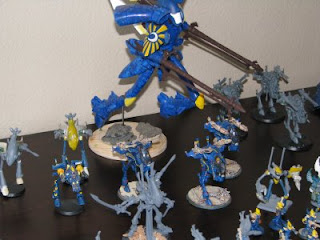 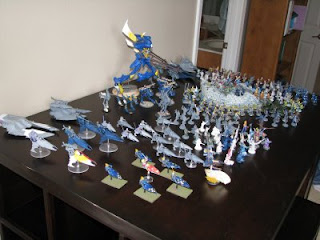 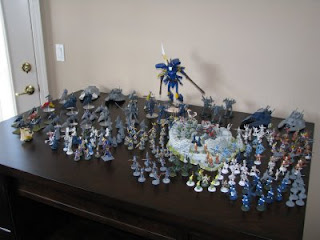 We bought a new desk, and the top looked like a perfect place to set up all my eldar. As you can see, the army is quite large, and needs a lot of painting. Most of the figures were painted while I was in high school in the early 90's. A lot of my army is half done. I will be posting what is painted now, and new squads will be posted as I finish painting them. Right now the Revenant Titan is at the top of the list for painting projects. I also want to figure out point costs for the painted and unpainted parts of the army. Stay tuned.

Posted by Unknown at 1:22 PM No comments: 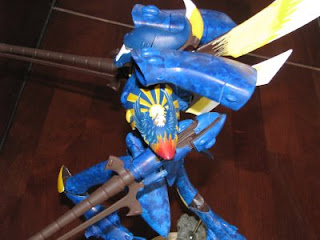 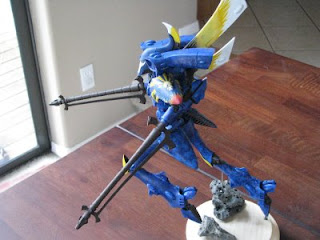 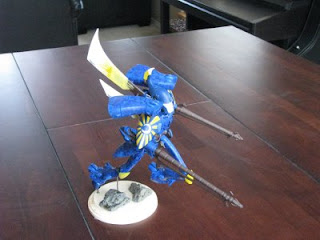 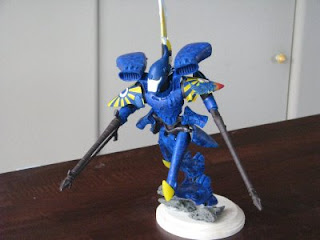 The Revenant is about 80% done. I have been trying out freehand painting, and it has been coming along pretty well. I painted the shoulder pads light yellow and then drew the designs on the shoulders with a mechanical pencil. Once I had a design I liked, (pilfered from Warhammer fantasy elves) I put the paint to the drawing. They came out pretty good. I still have a few touch-ups to do on them.
The Stipple pattern was done by first spray painting most of the model a medium blue, and then stippling layers of storm blue, enchanted blue, and finaly regal blue. I found that a twisting-dabbing pattern with the brush worked well with thick paint. If the paint got too watery, then the stipple pattern became very round. With thick paint I was able to get an interesting stipple pattern.
I have been considering what to do on the back fin. I don't like what is there now. I am thinking of doing a dark brown vine pattern over the yellow and white sections. We'll see how it turns out.
Posted by Unknown at 3:37 PM 2 comments: 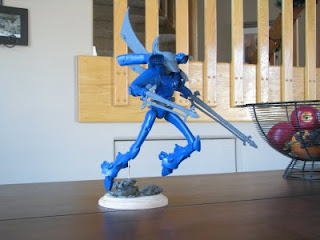 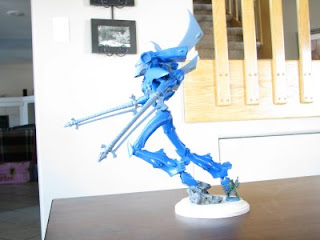 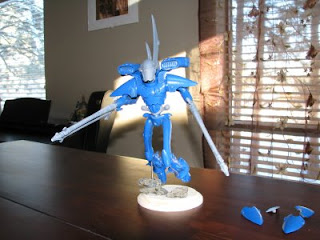 I finaly broke down and got a Revenant Titan.
I pinned all the important joints, and got him positioned in a decent, fluid position. I wanted him to look like he was just lifting off. Now I have some painting to do. These pics were taken December 27, 08.
Posted by Unknown at 3:18 PM No comments: