After playing a few games with the Dark Kin, I have remembered why I originally got addicted to eldar.  The dark eldar do the eldar thing better than the craftworlders right now.  Here are some reasons I love them.

1. Splinter cannons Rule.  The ability to choose heavy 6 or assault 4 on a long range, poison weapon rocks.  It goes great with: warrior squads, venoms, trueborn with the Duke, or strawberry jam on toast.

2.  Shadow fields.  Sure its not terminator armor, but a 2+ save rocks.  Its kinda fun when it shorts out (unless it was  a power fist that got through-then big squish) because then you really have to decide whether you are ready to throw your powered up archon into a fight in only his 5+ dark eldar skivvies.  Why not, he is a dark eldar.  We'll grow more in the lab.

3.  Trueborn.  These guys rock.  4 blasters, deepstriking in a venom next to a landraider, or a squad of carbines and splinter cannons with the duke is money.

4. Reavers and Chainsnares.  Natfka posted a great blog entry about reaver tactics at (natfka.blogspot.com he has a LOT of great dark eldar stuff too.  If you haven't yet, go check his site out) reaver tactica and using the movement phase to increase your chance of breaking units multiple times in a turn to scoot some units right off of the table.  So break them in the movement phase, then again in the shooting phase, and they are gone.  NO ONE else can cause casualties in the movement phase.

5.  Wyches in close combat.  I love the 4+ invulnerable in close combat.  You have a bunch of power weapons?  you got lightning claws?  power fist?  who cares?  I got some major fast chicks in leather that can jump out of the way.

I am keeping my army built around models that are currently available.  I am most excited about scourges.  If I were a dark eldar, I would have the local Haemy change me into a scourge.  I don't know if I would deliver messages all the time, but flying around Commoragh would be sweet.  Also I know I will be buying as many razorwings and bombers as possible when they show up.  May have to change the blog to Dark Eldar Addict.   Love 'Em.  All we need is a dark eldar titan.  Also, if I were a dark eldar Haemonculus, I think my wracks would be a lot more good looking.  They are pretty much intense plastic surgeons, so why build ugly looking helmeted monstrosities?  I would build a bunch of Pamela Andersens that could kick some major butt.

So what do you like about the new Dark Eldar?
Posted by Unknown at 9:51 AM 3 comments: 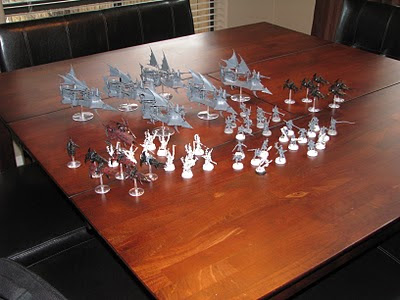 Here is the army assembled so far.  There are 3 ravagers, 3 raiders, 10 warriors, 9 trueborn, 5 wyches, duke Sliscus, Lelith Hesperax, 12 reavers, 10 Incubi, and a Venom. 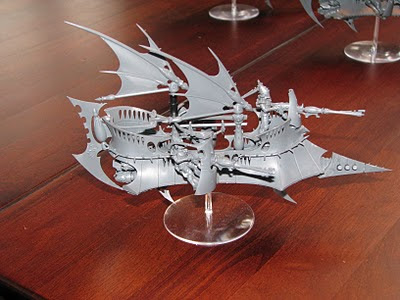 I went with a two-sail design on the ravagers and raiders.  This one doesn't have the driver on it, but I raised the rear sail about a centimeter to make room for the driver.  The rods I found that worked the best, were from a Bionicle set. 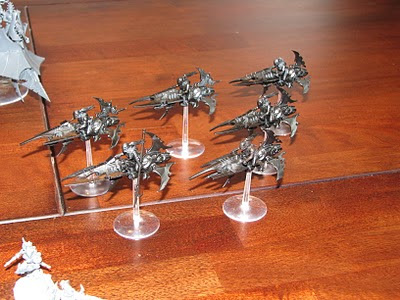 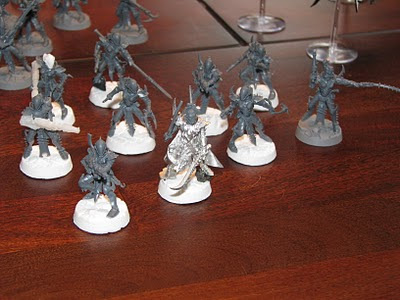 My Duke Sliscus with the twin venom blades, and my Tron-esque trueborn squad.  I got the Duke's right arm from fantasy, dark-elf, corsair arms.  I need to green-stuff around the magnets on all the leader's magnetized arms.  Eldar are really tough to hide magnets, but a little green-stuff works great to hide them. 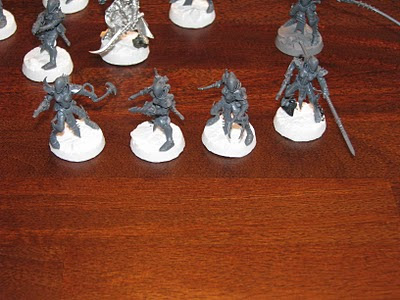 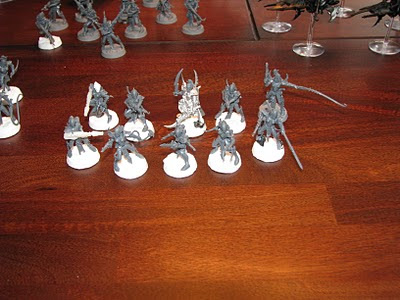 Trueborn again.  I like the reaver heads to differentiate them from regular warriors. 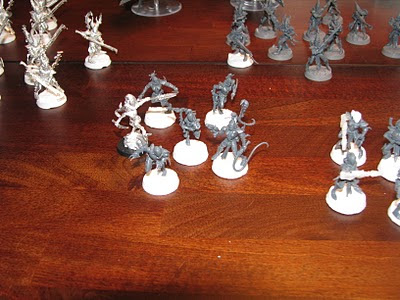 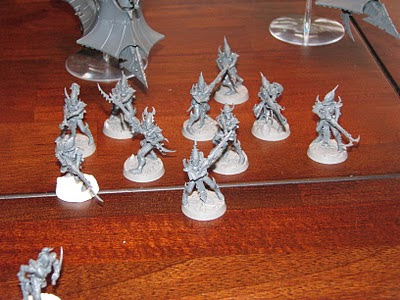 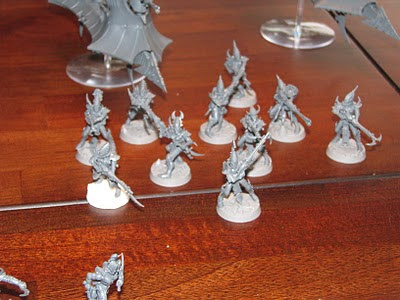 Warriors.
I want to paint the army in a black/dark red theme.  I originaly was going to use the kabal of the obsidian rose, but couldn't get behind the rose theme.  I have used birds for my craftworld eldar, and am getting excited about birds for the dark eldar again.  Probably crows, ravens or something like that.  Kabal of the murder of crows?  Kabal of the Raven?  Still don't have a great name.
Posted by Unknown at 4:12 PM 3 comments:

I ordered some new heads from Poland.  Which head do you guys like for the Space Hulk Librarian? The skulls are staying, but should I trim off the lightning on the ax head and handle? 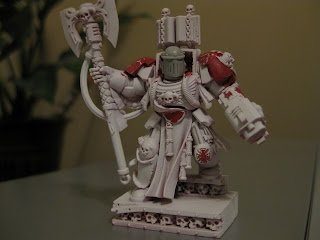 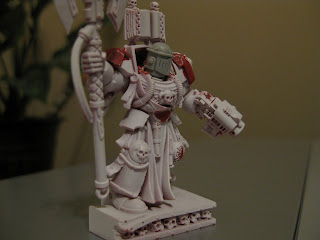 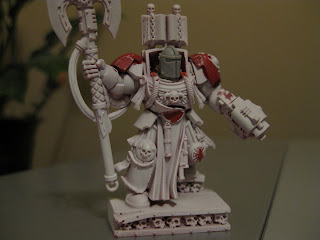 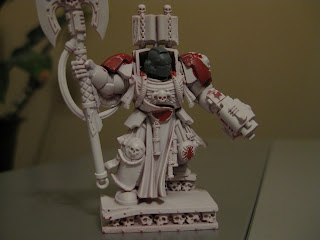 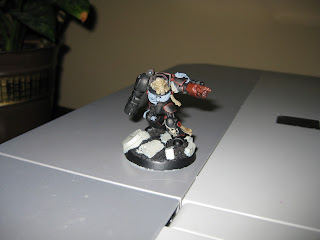 Here are some of my Templar. The photos make them look like crap, oh well, you get the idea. 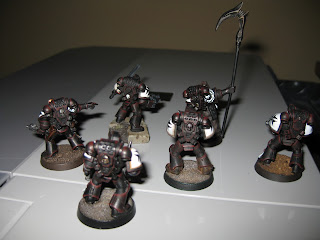 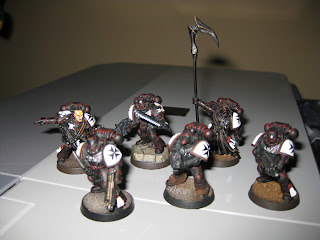 So here is the list I am looking at for my Dark Eldar army.

I know a lot of people won't like the Trueborn with ccw and pistols, but they come stock with 2 attacks which means 4 attacks on the charge.  They are also ablative wounds for the duke and the blaster Trueborn.

The whole army rushes forward except the foot warrior squad and Ravagers.  The Reavers fly around annoying people.  I also really like the chainsnares on the raiders and venom.  Once they have dumped off their troops, they can still chainsnare and hopefully break a few squads in the movement phase and let the shooty parts of the army break them further in the shooting phase.    I like the phantasm grenade launchers on the wyches so they can take out a squad in cover ( I removed the PGLs after realizing that the wyches come with plasma grenades.  I have been playing them wrong! So those are gone).  I also really like agonizers, but wonder if the points would be better spent somewhere else.

I have been busy assembling everything, which isn't too exciting.  I will post what I have built so far, which includes the duke, lelith, the warriors, 12 Reavers, 3 Ravagers, 3 Raiders, the Venom, 10 incubi, and 8/10 trueborn.  Almost there.  Just need to get two more blasters, assemble the wyches and I am good to start painting.
Posted by Unknown at 8:22 AM No comments:

This year I have settled on a new plan to keep up the modeling momentum.  It seems I get going on something, set some grand plans, and then get burned out.  So this year I am going to switch armies each month.  January will be Dark Eldar, February Tyranids, March Eldar, April Space Wolves.  I plan to paint, model, and play only that army during the given month.


Here are the lists I have been working on:

Being a longtime eldar player, I know how frustrating strength 3 can be, so I included the agonizer.  I like the mark of the wulfen-  I mean hydra gauntlets on the witches for slicing and dicing.  I put the five wyche squad together because I need another raider.  I see them as an annoyance, tag team group that won't get targeted for awhile because of their limited size/usefulness.  But used in conjunction with the other cc squads they could work out just fine.  And of course the 20 warriors camp in cover.  I have found that I like to run a mixed close combat and shooty army.  The Reavers I think you need to keep cheap and focused so, the two separate purpose units. I don't have my codex handy, but hope it comes in around 2000 points.

Again I need to check point values, but the Swarmlord marches up the middle behind the Zoanthropes, with the tyrannofex in tow, the parasite works with the gargoyles, and the tervigons and trygons do their thing.  I may put the Zoanthropes and devourer gaunts in pods for some spore mayhem.
Posted by Unknown at 8:57 AM 2 comments: