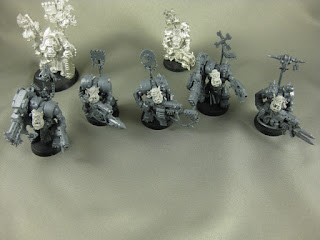 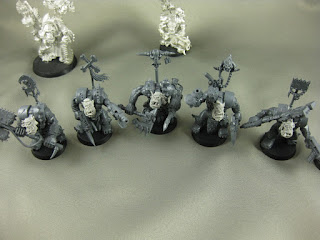 Royce gave me some magnets for my birthday, and now I don't know what I ever did before magnets. I bought bits for 10 nobz minus the heads because I'm using ork pirate heads from MaxMini. My plan is to use the nobz for Flash gitz, regular nobs, or Lootas. I'm not a big fan of the regular lootas, but their weapons are cool. Now I just need finish off the last five and paint these suckers. 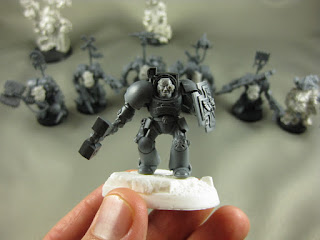 Here is my magnetized Terminator. 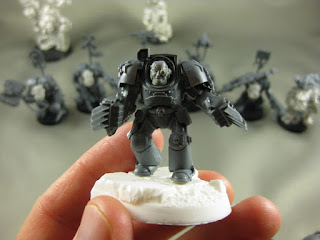 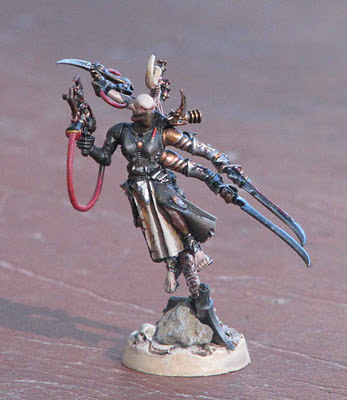 I really like the way this model came out.  I finally decided that she needs a light base to contrast the dark of her paint job.  The arms are all magnetized so she can have all kinds of different weapons.  I like how the double venom blades work in games.  The liquifier gun came out pretty cool too.  I really like the different shades of brown, with metal trim, and just a little red. 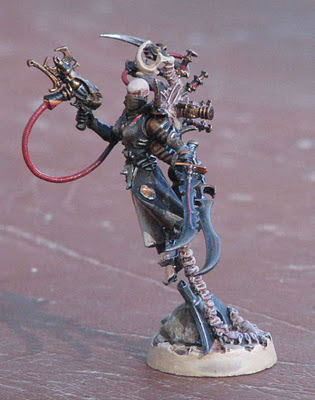 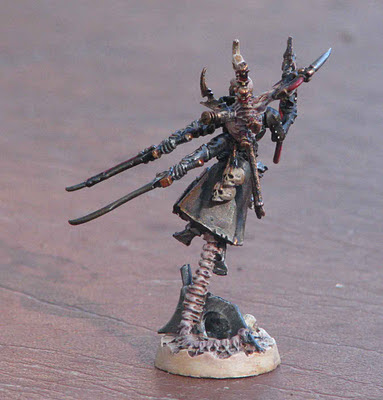 The cloak/cape I really wanted to look like worn and dirty leather.  I originally painted it black, then drybrushed, washed and wet-blended every brown paint and ink I have onto it. 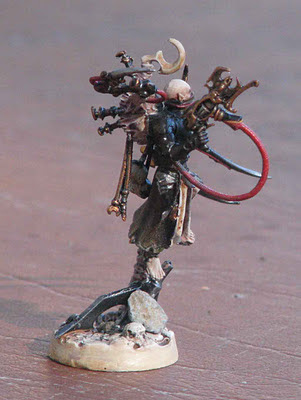 The liquifier came out pretty nice.  I painted it mechrite red, followed by blood red.  the highlight on the 'half-full' look is Iyanden Dark sun for the top yellow, then 50/50 Iyanden with mechrite red, and then pure mechrite red.  If you place the yellow first, then the mix as close as possible to the yellow edge, and the the mechrite, you can get some great blending and very thin lines. 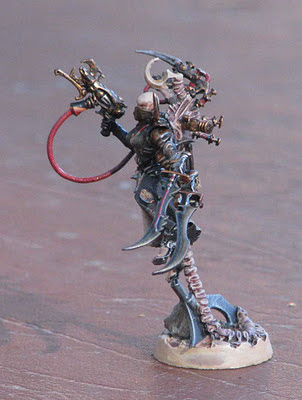 Saturday I played a great game against some blood angels.  Mission was the custom mission for the campaign from last post.  My Dark Eldar did an amazing job.  Sorry no pics.  It was a quick battle between basketball game and birthday party for my son.

Haemonculus  +1 initiative Agonizer, liquifier gun (+1 toughness on the Haemy,  The upgrades were from past battles XP we have been running for the campaign and the special weapon from last battle.)

748 points (if I remember correctly)

no transports for the army as in the mission they are in 4 armor 12 barracks.  The marines get first turn and can come in from any table edge.  Dark Eldar are a fish in the barrel to start.  Barracks are #1 in NW corner, #2 NE corner, #3 SE corner, and #4 in the SW corner.

So I started a Haemonculi and wyches each in barracks 1 and 2, barracks 2 having my target HQ (target for the marines) wracks in barracks #3 and scourges in #4.  The talos went in to barracks 2 with the hq.

He brought a lascannon razorback on the north and south board edge, with the 5 man marine squad on foot walking up to each barrak #1 and #4.   The Death company dread came on the eastern edge, and the typhoon on the west edge.  Each vehicle fired at a separate barracks, but only #3 with the scourges exploded, killing two scourges in the explosion.  Nothing else to do for the marines.

So that wasn't so bad.  Marines lined up just where I want them.  Cue the Chorus of cackling Dark Eldar.

The wyches from Barrack #1 (NW) jump out of the barracks ready to attack the death company and reclusiarch, the wracks from #3 lined up for some liquifier fun on the assault marines.  The Talos came out to play and faced off between the buildings lining up against the death company dreadnought and the typhoon in the distance.

Shooting saw the scourges hit twice with their haywire blasters, get one glance and one pen and explode the dreadnought.  The Talos shot his haywire blaster at the typhoon and stunned it.  Then the wracks sprayed some ap1 special wrack juice on the assault squad, killing 3.  The assault squad then failed morale and headed for the hills.  The wyches fired at the death company, but all the wounds were saved.

Lots of rolls went my way that round.  Dropping the death company dreadnought, ap1 liquifier and some good hekatrix rolling really paid off.

The assault marines regrouped and moved toward the wracks.  The razorbacks lined up shots on the talos, the death company was locked in combat, and the typhoon was stunned.  Two lascannon hits rocked the talos, but then failed to wound.  The assault squad shot the wracks and assaulted.  I think 2 death company died, and 2 wyches died, then 1 wrack died in assault.

The wyches with the Target Haemy came out of building #2 in the NE corner and ran towards the typhoon.  The Scourges shook a razorback.  Close combat saw another wrack fall, and the death company and wyches trade a death each.  The wyches exploded the typhoon with their haywire grenades.

It looks like things are really going my way now.  The talos can open up on either razorback, the wyches should handle the death company, and the wracks should finish the assault squad.

At this point, my opponent's dice really started to betray him, (they had already been horrible) and mine continued to work for me.  The next few turns saw the wracks finish the last assault marine, the wyches finish the death company, but the reclusiarch finishing off the last of the wyches.  He ran and hid from the second squad of wyches.  The scourges and Talos tag-teamed a razorback with haywire blasters, and then the game ended.

Everything seemed to go well for me this battle.  I really like wyches in CC, and agonizers work great for me against marines.  Haywire blasters are fun and effective.  I really needed an agonizer on a wrack acothyst.  I am loving dark eldar.
Posted by Unknown at 5:08 PM No comments: 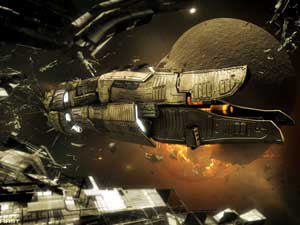 These are my ideas for the next battle.

The Tyranid, Dark Eldar, and Rogue Trader attack has prevailed again.  We lost our Genetor on the the moon colony.  We have determined that the best course of action is to destroy the leaders of the enemy.  Our reconnaissance has found a base camp of the xenos scum.  The location has been transferred to your Tech-priests.  Capture the Hq at all costs.  He must be questioned and destroyed.

Continue the pressure on the Imperials.  No one must survive our wrath.  All will kneel before us.  No quarter.  No mercy.

Imperials deploy 6 inches onto any board edge and have first turn.

Axis deploys in 4 barracks.  Barracks are armor 12 all around, can hold 20 people each, with Jump troops, beasts taking 2 spots, monstrous creatures taking 4 spots.  4 firing slots/windows per facing.   All transports and vehicles are in reserve for Axis and come on first turn, or are put in reserve.  Barracks are buildings with rules as described in the rulebook.

Objective is to capture the axis HQ.   If he is killed in CC, then he is captured by that squad, and is an objective.  Axis can recapture him.  If he is killed by shooting, then he is lost and Axis wins.  He can be transported off of the table by the imperials, but not by the axis.  If he is dead he can be transported by two people who become slow and purposeful.  He is worth 3 points.  Whoever ends the game with him wins.

Axis places the Barracks wherever he likes and must number each barrack.  Then the axis player will note what is in each barracks with restrictions for capacity above.  Yes you can have multiple squads in a barrack, or nothing.  The HQ must be placed in one barrack.

If you have any questions, feel free to email me

I also want to get a zombie mission put together for fun.  Will work on it.  October means zombie month.
Posted by Unknown at 3:55 PM No comments: 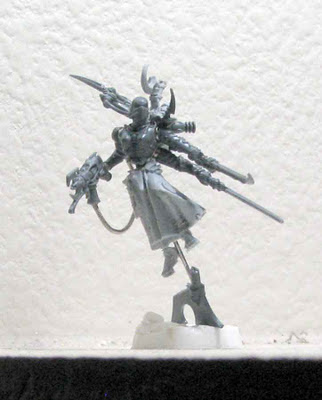 Here is a new Haemonculi conversion I did.  I wanted a couple of things:  1) a more dynamic pose 2) 2 cool venom blades, 3) a right handed liquifier gun.  The lower legs are a wrack.  I broke off the right foot and repositioned it.  The upper body front is from a reaver torso with a warrior back.  I added the wrack's back sump and made the liquifier out of a shredder.  I bet the shredders will rock next edition, but right now I can't find a use for them.  A spine/tail will cover the wire.  Greenstuff needs to go in a couple places too.  She has an extra magnet for another weapon if its needed. 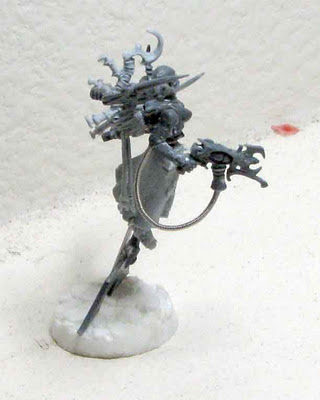 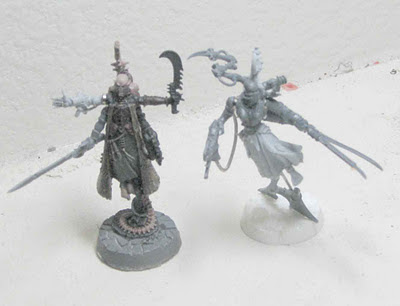 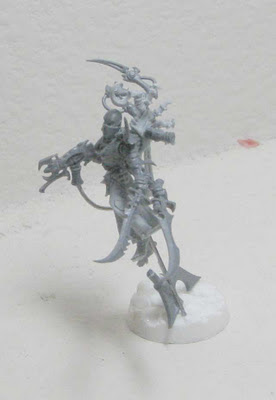 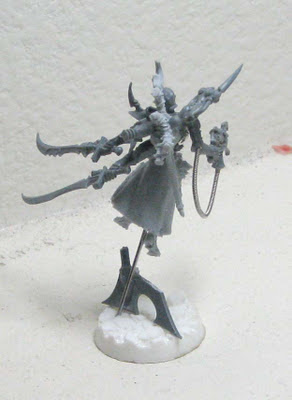 Also some sniper born.  I like the guy sitting down. 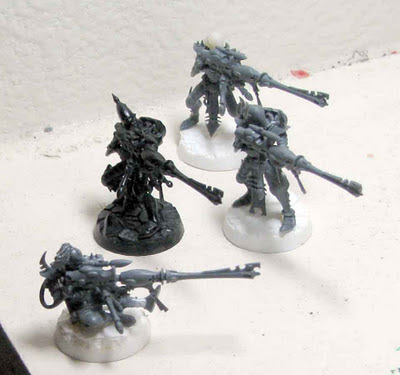 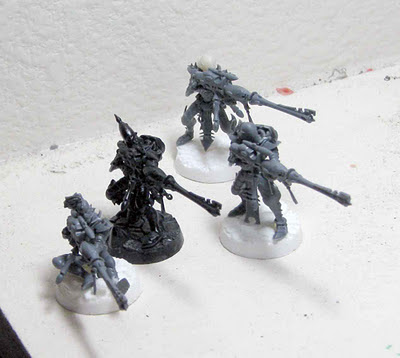