If you have been feeling the influence of the hive mind lately and need some advice, inspiration, or just need a fix, check out From the Warp's collaberative post called Inside the hive mind.
Inside the Hive Mind  There is a LOT of great stuff there.

Here is a new one from old school tyranids-where-to-go-in-blogosphere-for
Posted by Unknown at 9:05 AM No comments:

I bought a Mcfarlane Dragon from my brother to turn into a winged hive tyrant.  He had a great model that fit the bill.  I wanted to do a lash whip, bone sword combo because it looks so sinister.  The double talons is probably the better tactical choice, but I wanted this guy to look mean, so I went with the lash whip. 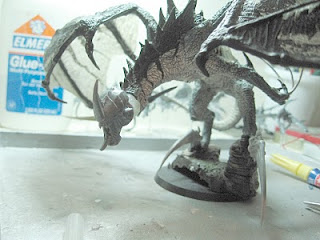 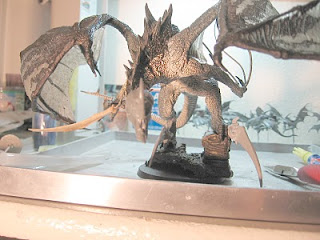 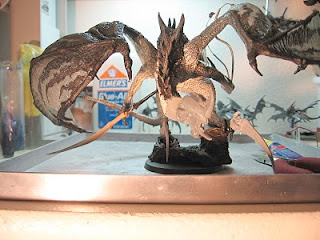 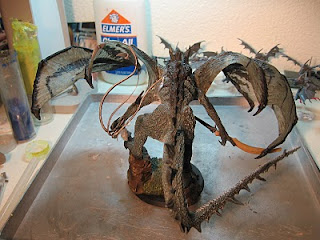 The bone sword is an actual bone I found in the dirt a few years back, when I worked construction.  I hope it is a turkey bone, it doesn't look too human. 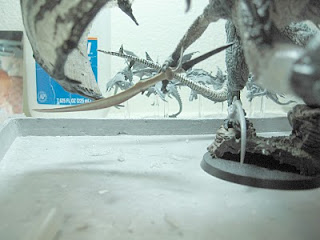 The bottom part is the tail of a termagant that was sacrificed in making the tervigon.   I added a small bass guitar string (the g-string) from the sword to his wrist to make it look more attached/organic. 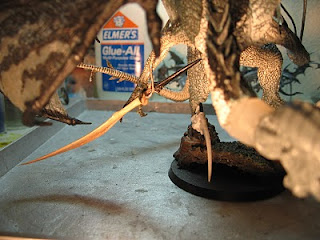 The lash whip is made from the ends of the bass guitar strings, the E, A, and D string.  These are the ends that you cut off when you put the strings on the guitar.  I then just added on some extra trygon spikes on the end.  I drilled into his arm a bit to make it look like the whip was part of him. 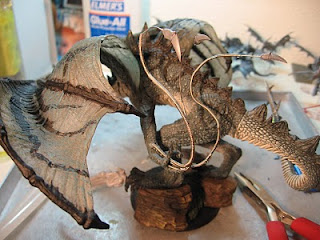 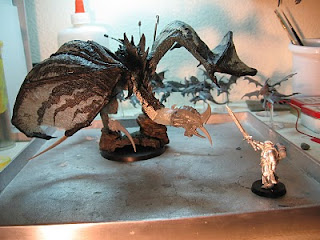 Here is a pic for scale.  Kinda looks like St. George vs the Dragon, 40k style.  You can see I used raptor1313's idea to fill in a lot of the neck with hot glue before adding green stuff.  I have since greenstuffed the neck, sword, and lash whips.  I covered the ends of the whips to bulk up the last part of the wire where the coil stopped.  It also helped to make the spikes fit on the whip a little better.  I also finished the base, and have started the painting on the tyrant.  Hopefully he'll be done soon.
He is rather big, but I know he will draw attention one way or another, so bring it on.
Posted by Unknown at 4:41 PM 5 comments: He's done.  I finished him up this morning for the Bell of Lost Souls Nid competition.  I ended up cutting a piece of board the size of the Trygon base, and mounting a brass rod from the base into the gut of the Tervigon.  Then I wrapped the central birthing canal around the brass rod.  He is also the first model with my new lights for photos.  Now my pics won't all be so dark.  I am still undecided on whether I like the egg sacks on the back or not.  The next one I build will probably be the same, with the egg sacks only underneath.
I am also going to do a step-by-step on painting my Trygon.  I learned a lot about painting big bugs on this guy.
Tervigon WIP 1
Tervigon WIP 2 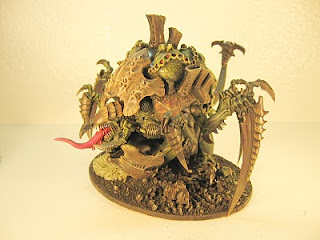 Why do you play the army you do?

So why do you play the army you do? As a kid growing up in the eighties, I played some Dungeons and Dragons, much to the chagrin of my mother. For me the story behind each game is as important as the game itself.

I started in 1989 playing eldar because I liked the pirate/alien theme. I liked them even more when they became craftworlders fighting to stay alive in a hostile universe. Every eldar lost in battle is another little bit of beauty lost from the universe. When playing, or even painting the eldar, I have a feeling that we can restore the eldar to their rightful place as Masters of the Universe. (no not He-man)

While painting, modeling, or playing Tyranids I feel as though I am part of the Great Devourer and that all life needs to be consumed to feed the ever-hungry master. I have no remorse for any lost organism, as long as the others can continue to feed.

I have started a Marine army, and stall whenever I go to paint or play them. For some reason, I feel as if I am just a grunt doing my job for the Emperor I don't really know or care about. I feel like I am back at work, putting in the hours, because that is my job- to rid the universe of alien scum to protect people I don't know or will never meet. Once again I feel like I should punch a time clock and get paid for the time as a Marine general.

I have started with some Orks as well, and can't seem to wrap my head around them. Sure their models are great, but they just seem to be bungling, inept, destructive frat brats out to blow some things up. That is fun for some time, but also doesn't seem to hold my attention.

I tried starting some Tau, but again couldn't get into their history very much.

So why do you play the army you do? I know I am not the only one to feel some connection to why they play, so let me know.
Posted by Unknown at 7:20 AM 7 comments: